So you've decided to look into making car keys for your customers but not sure exactly where to start? This introduction is meant to give you some guidance and tips. Whether you purchase your products from American Key Supply or not, this guide should help you figure out what you need and how to get it.

Have we left anything out? Please contact us and let us know so we can add more info for everyone to see. 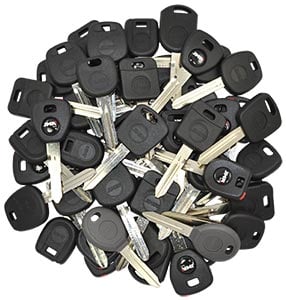 If you're just getting into the business, it can be a very expensive and time consuming task to try and figure out which keys you should or should not stock. We've tried to make it easy for you by putting together some "Starter Packs" which are our recommendations for what you should be keeping in stock. If you click on the links below, you'll see the complete list of keys within each Starter Pack. Notice that some packs include very little of some keys and many more of the others. That's your clue to knowing which cars you're most likely to run into in the field.

If your customer lost all of their keys and you're not performing a simple key duplication, how are you going to find out what cuts to put onto the key blank? Traditional locksmith (sometimes called "real locksmithing") involves removing locks from the vehicle and many times disassembling and/or decoding the lock. Many times that's a 15-minute job, but sometimes that's a 2-hour job. With older vehicles, it even involved removing steering wheels. Thankfully, there are many new tools and methods available to the automotive locksmith to make key originations easy and quick. Remember, though, that traditional locksmithing is still an important skill to learn and practice if you want to support as many vehicle types as possible.

There are a few kinds of software that are important for every automotive locksmith to have.