Two things to keep in mind before trying to determine warded/unwarded:
Truck/Van/Suv platforms (Silverado/Express/Equinox) are always non-warded.
The changeover years are usually somewhere between 08-09.


From here, there's a few ways to tell what kind of lock you’re working on:

1. Try to insert your GM37 into the lock. Doesn't fit? Probably warded.

IF YOUR LOCK IS NON-WARDED, you are on easy street. The tool is robust. The picking is easy. The reads are clean.

IF YOUR LOCK IS WARDED, you're probably going to have a bad time until you get a good feel for the tool.

The thing to really keep in mind with the warded tool is that the lifter arms are very thin to get around the warding, and this makes them very susceptible to warping under pressure.

If you use too much pressure on your lifter arms, in both the picking and decoding stage, they will warp. It's really not much of a big deal because they will spring back-- unless you go full kung fu grip on them.

In picking, keep in mind that you can push on them hard enough to simulate what you think is wafer slap and think that your wafer is already picked when it isn't.

In decoding, keep in mind that you just need to bottom out the spring to kiss the end of travel and undue pressure will cause the arm deformation and result in your read being too shallow.

It’s worth noting that the warded locks are also often sloppy reads because the tool doesn't stay very well self-centered in the lock.

In this case, you have a few options.

1. Try to keep the lock centered manually. Decode where it reads consistently enough to get an on-the-line reading. Sometimes you may have to take multiple reads.

2. Use half-cuts in your progression software/app of choice. It's been my experience that even if you enter mostly or all half-cuts into your fill program, the series isn't obscenely large and won't usually result in a long progression chain.

3. Combination of manual centering and half-cuts.

I usually let the lock guide me as to which to use.

Hopefully this is helpful.

It is worth noting that there are some Cadillac sidebar Z-key applications where the 2-in-1 tools will not work. For the 2008+ CTS, the B107 Direct reader is an option.

There are some older prox-equipped models where the emergency key doesn't unlock the door, but manually operates the latch. These have a VERY heavy springback on them and it's not advisable to use the tool to fully turn the lock over. 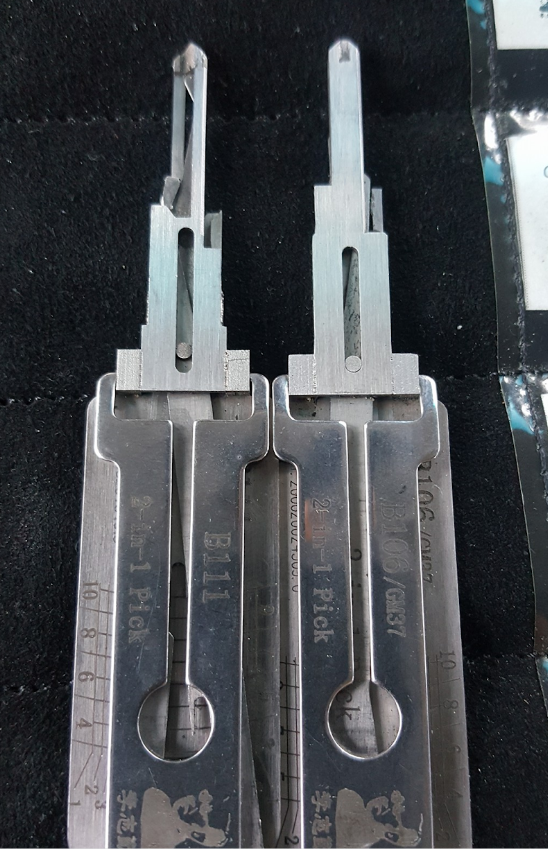