In my time as a locksmith involved in support groups, forums, and just working with less experienced guys, I’ve seen my fair share of people getting tripped up by aftermarket alarms, especially when they’re coupled with immobilizers.

Unlike most factory-installed systems, the aftermarket alarm will not usually go out by cycling a key in the door or turning a programmed (if applicable) key in the ignition.

Unfortunately, the job from here is dependent on the vehicle, the system that was installed, and the skill of the installer.

Other giveaways often include a flashing surface mount LED mounted somewhere in the dash/knee bolster area, an antenna module attached to the windshield, or an integrated LED/Antenna/Valet button (pictured below on the right) mounted to the windshield, A-pillar, or dash.

Option one - Valet button/switch
Once again, this is going to come down to whichever system was installed, but most systems will have some kind of manual emergency system in place to disable the alarm in the way of a valet button/switch.

The valet button will often be a surface mount momentary push button, LED push button, switch, or integrated into a single LED/Antenna/LED unit. 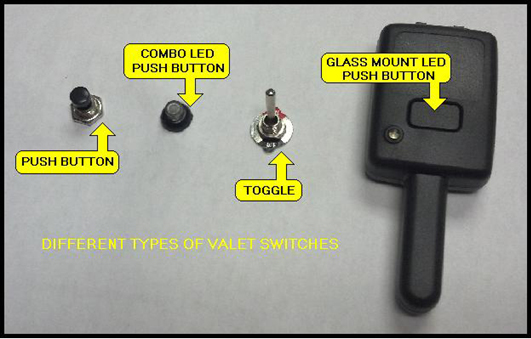 Operation of the valet button is usually as simple as turning a key in the ignition and pushing/switching the button once. This will disable the alarm until it is rearmed. Without knowing if there’s any kind of passive arming (where the system automatically rearms itself after a set amount of time) it’s usually safest to inform your customer of the procedure to turn it off, if only as a precaution to protect yourself against callbacks.

Most systems are programmed in a way where a single button push will deactivate the alarm, though there are some that are configurable. If a single push doesn’t deactivate, you can experiment with multiple presses.

Standalone valet buttons/switches are often mounted in the knee-bolster or lower dash area if they are mounted at all. Some installers will either get lazy when it comes to the installation or believe that it’s more secure hide the valet button elsewhere in the dash or omit installing them entirely.

Option two- Disabling the system electrically.
I’ve long heard of people telling others or being told to just ‘pull the harness to the brainbox’ or ‘pull the box out’ and in many systems with immobilizers, this just is not a valid solution.

To explain the process of why this doesn’t work and why the alternative I’m suggesting does, below is a very rudimentary diagram of the stock starter wiring in the vehicle.

When the key is turned, the ignition switch puts power to the starter and the vehicle will crank.

When aftermarket immobilizers are installed, they will often sever the line between the ignition and starter (pictured below) and insert wiring from the module to both ends. At this point, the alarm will then electronically switch the circuit open and closed depending on whether or not the alarm is active or not.

I’ve long heard people just advocate that you just start cutting wires or remove the wiring harness from the module and it will be automatically disarmed, but doing so will just leave an open circuit (below) between the ignition and starter. At this point, there is no physical link between the starter and the ignition switch and there is 0% chance of this vehicle starting.

Fortunately, these systems are usually fused and designed in a way that the relay that controls the severed line will fail safe, so pulling the fuse from the wiring will allow the vehicle to start normally.

Option three - cut it out.
Alternatively, the more permanent solution (or alternative if pulling the fuse doesn’t disable it) is to completely cut the module out completely and reconnect all of the ignition wiring that was previously severed. Doing this will often marry you to any potential ignition wiring issues in the future and is only recommended for those that are comfortable with proper wire splicing techniques. Soldering with proper heatshrink is best, but there are effective butt connectors on the market that can work just as well in the hands of those not skilled at soldering or when the work area is to tight for it to be a viable option.

In conclusion...
Hopefully this brief look at common aftermarket alarm installation will allow you to alleviate these issues when you come across them. Luckily, transponders and remote keyless entry becoming standard options really seem to be making them a less common occurrence.

"Chris Lira is a seasoned automotive locksmith with nearly a decade of experience in the field. He can often be found in any number of locksmith forums, dispensing advice, support, and wisecracks. Recently, he relocated to Las Vegas, Nevada to provide his expertise to American Key Supply as product manager and industry consultant.